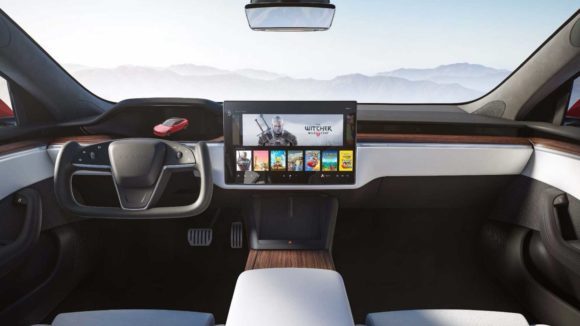 As part of last week’s Q4 Earnings call, Tesla revealed several changes being made to its Model S and Model X vehicles.

Exterior changes to the S include new front and rear bumper designs as well as changes to the 19 and 20 inch wheels. Most of those would go unnoticed to most casual observers.

Inside, it’s a whole new ballgame for both the S and X.

The steering wheel is gone, replaced with an aircraft style rectangular yoke. Turn signal switches have been replaced by buttons on the face of the yoke and headlight controls have moved to the screen.

That screen is now carrying 10 Terraflops of processing power or about the same as a the new PS5 gaming system. The updated Teslas also feature gaming options with wireless controllers for both the front and back seats.

As for what’s “under the hood” if we can even say that anymore, Tesla has a new triple motor offering called plaid.

Plaid + high power versions (1100 HP in the X) increases both acceleration and range.

The new versions will begin delivery in March with Plaid + arriving later in the year.