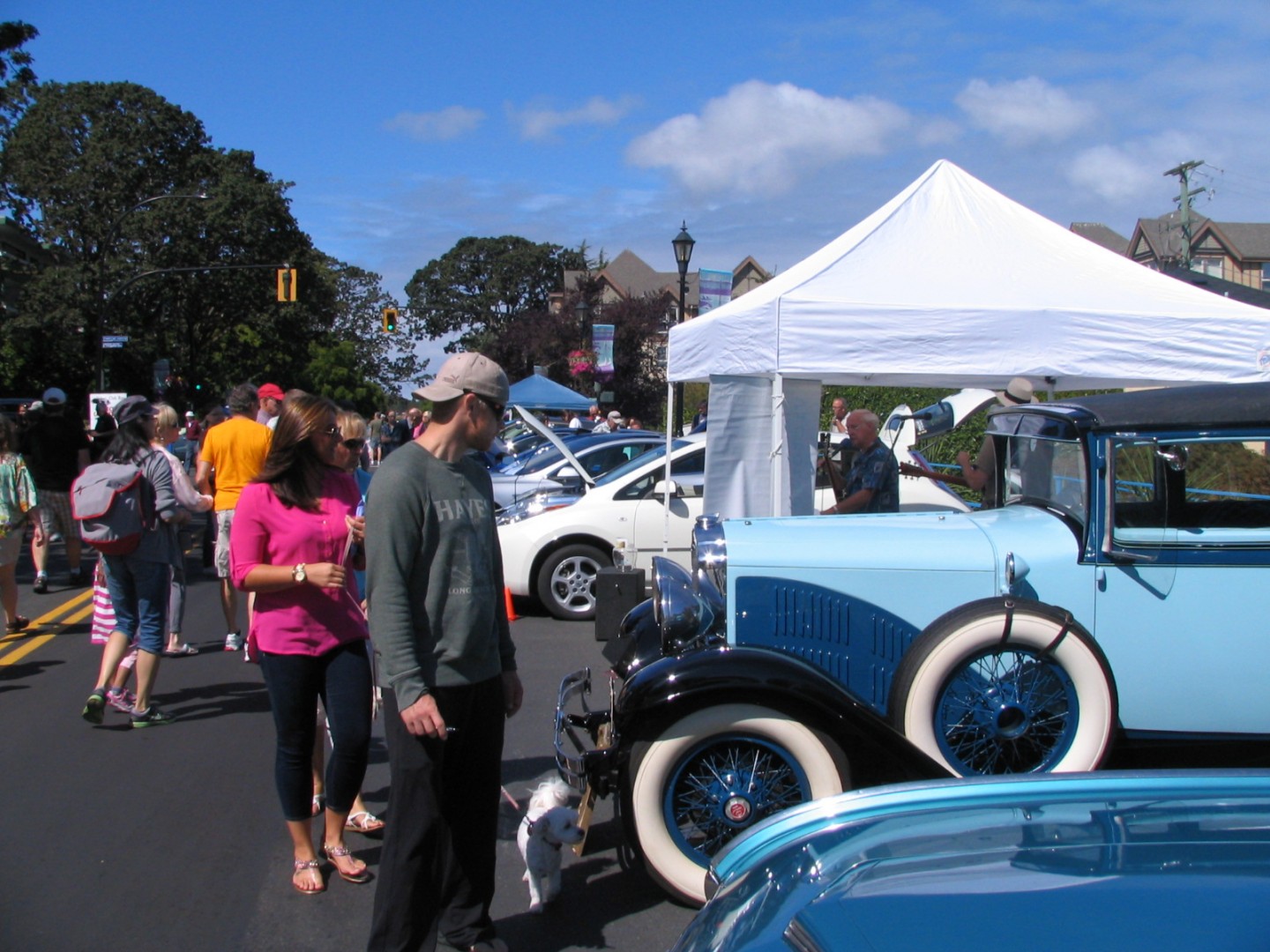 The Nissan LEAF was Oak Bay Collector Car festival’s most requested electric car. People just wanted to know where they could get one.
BC’s fast charger program has put the question of range to rest. People say they are now in the market for a new or US used Leaf and
many may be able to take advantage of the BC Scrap-it program and get $3000 off a possible starting price of $15,000 used 2011 LEAF or 5,000 in addition off a new EV.
People understand, buying an EV that inexpensive, makes the purchase of a car an investment with gas savings.

Our VLC band was playing : ” Dreaming of a white TESLA,” as show visitors were drooling over the Teslas. Silke just refused to give any more test rides. Too busy showing her blue Tesla super car.

Sunday 7 a.m. Silke and her Kye getting ready for the opening of the car show. :)

Jim Hindson’s brand new Kia Soul, a new entry into the 100% electric car market, attracted curious onlookers wondering in disbelief if the KIA Soul actually was a 100% electric car. The Kia Soul has a 27 Kwh battery pack and can travel 200 km on a full charge.

Dana Elizabeth did not have a dull moment with her popular BMW i3 100% electric car. Dana has volunteered at many of our car shows
and always is surrounded by interested people wishing they had one. :)

Rolf Oetter gave many test rides in his white Tesla, as well as Jim Hill in his white Nissan LEAF to the side of our feature Barry M. Carlson band.

Kelvin Kedves, a retired RCMP officer needs a 5 seater LEAF electric car rather then his 4 seater Miev. You may buy his for
$12,000. What a deal, catch this one before a dealer gives him a trade in.

Hal Gibbard is showing his blue Miev to a family of four. Nice to have both Mievs next to each other same would be true with KIA SOUL and BMW i3 maybe next time.

Marc Semail’s 2013 Nissan LEAF was on the move all day. This is the first time we gave rides at the Oak Bay show in it’s fourth year of VLC’s participation.

Lisa & James Locke taking time off for our website photo. Lisa is driving a Nissan LEAF and James got the Tesla. Well, James will be driving long distances to the Northwest Territories. The LEAF is not quite ready to travel that far yet. :)
Silke Sommerfeld is in the background with her beautiful dark blue Tesla P85D Insane Mode Launch Reactions Compilation.Click here for a video

Look closely through Bert Neijmeijer’s black Tesla and you can see him busy explaining why one cannot see a motor or batteries looking in a Tesla.

There has to be some one out there to love me enough to by me a Tesla. :)

Nice to have six members of the Tesla team join us in Oak Bay. They too set up tent at 7 a.m. The Mayor reserved a special spot for them in the middle of the festival. Well,- – Ken Argate, show organizer did.

We also had Colin & Jenny Bell join us. A young couple starting out an eco friendly transportation company in their LEAF. We will be featuring them at a later date.

Thank you all for coming out to advocate for 100% electric transportation and help to work for an improved environment in our future.