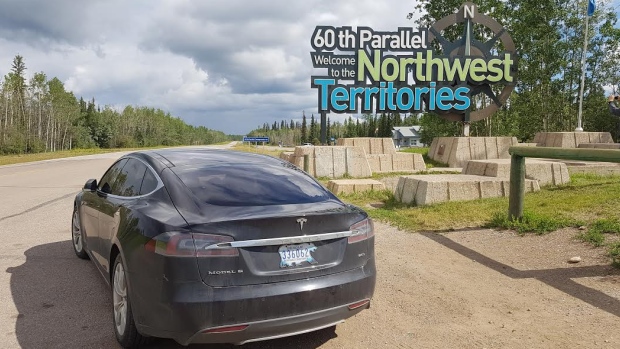 VEVC’s own Board Member drives Tesla from Victoria to NWT

“We called it the Polar Express,” he says.

It may seem like a car made for the city, but Locke says his Tesla fits right in in the North.

To start with, the car can be heated or cooled from inside his house, using the home’s power to run the air conditioning or heater.

Long drives are quieter, and it has built-in autopilot features that help keep the car where it needs to be.

Locke says maintenance is also a breeze. Though the nearest Tesla dealer is a 13-hour drive away in Calgary, he can have his car examined remotely over the internet, even downloading new software without leaving the driveway.

What about the range?

Range, or how far an electric car can drive on its charge, has long been the central stumbling block in progress towards electric cars, though. And if the North has one thing in abundance, it’s distance.

Gas stations are scarce enough along northern highways, let alone Tesla’s fast-charging stations, which have only just begun popping up across North America. So far there are none north of Edmonton.

The car’s range is also affected by the cold. When temperatures dip below –40C, the car loses about 30 per cent of its range in order to heat the battery.

‘I’m looking into getting a solar array put on the house so I could just charge through the sun,’ says James Locke. (CBC)

“If you do get stuck, all you need is an outlet with power — and what town doesn’t have power?”

A full charge can take two hours at a regular power source, but Locke says he sees it as an opportunity to spend some time in towns where he wouldn’t otherwise stop.

The Best Western hotel in High Level, Alta., plans to install one of Tesla’s home charging stations at Locke’s request, and he says it’s his mission to get other businesses to do the same, so other people might follow his lead and bring more electric vehicles north.

Electric vehicles are eligible for government subsidies in some parts of Canada, but not in the Northwest Territories. Locke says the $86,000 price tag was a major consideration.

“I’m not rich,” he says — but he hasn’t looked back. The best part is that he gets to drive right by gas stations.

“I never would have spent any kind of money like that on any other car.”

In the last year, Locke has put 70,000 kilometres on the car over several road trips, and says over that time he has saved $12,000 in fuel compared to his previous SUV.

He estimates that charging the car is costing him about $1,500 on his electricity bill.

But Locke is considering taking it a step further, and cutting out the need for external power entirely. In Hay River, that power is hydroelectric, but in some parts of the world coal plants can actually make electric vehicles more polluting than gasoline ones.

“I’m looking into getting a solar array put on the house so I could just charge through the sun.”