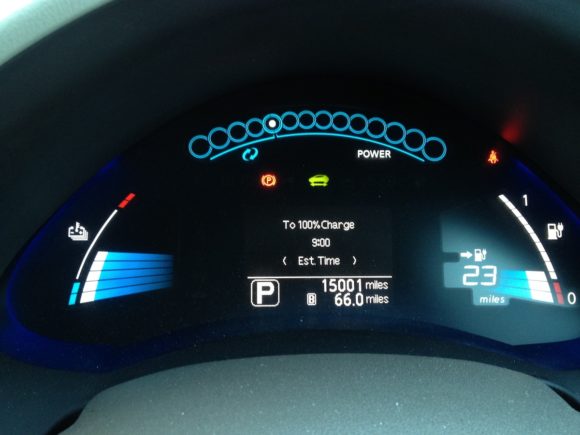 On October 26, CBC News published a report from business reporter Dianne Buckner chronicling the difficulties encountered by a Nissan Leaf Owner trying to replace the failing battery in his vehicle.

In 2017, Clayton Brander of Powell River, BC, purchased a used 2013 Nissan Leaf with approximately 57,000 Km on it and a battery depleted to 10 bars that still achieved an average per charge range of 120 Km.

Three years later, in the Fall of 2020, his battery had dropped to 8 bars and the car’s range had reduced to 80 Km. With an odometer now reading 105,000 Km and his Nissan warranty past the vehicle’s original five-year window, Brander knew the replacement cost would be his to bear.

After failing to get a response from Nissan Canada for several weeks and visiting a local Nissan dealership where he was quoted $15,000 for a new battery “if they could even find one”; Brander decided to take his problem to the CBC to both see if they could find somebody at Nissan who could solve it and make other owners of first-generation Leaf aware of what the future might hold for them.

At the time of purchase, his car dealer had made him aware that the vehicle, originally imported from a much warmer climate in San Jose, California, had been “driven hard and put away wet” with its records showing very high use of DCFC charging, sometimes being fast charged several times in a single day.

The dealer also told him, that while a battery replacement was a likelihood in the foreseeable future, the cost would be in the $5,000 range.

What both Brander and the dealer could not know, is that Nissan would update its battery replacement policy one year later, shortly after carving off its battery-manufacturing subsidiary, Automotive Energy Supply Corporation to the Chinese Investment firm GSR Capital.

No longer in complete control of its battery supply-chain, the cost of replacement quickly jumped to $8,500 and then $11,000 in 2019, sometimes going even higher as Nissan Canada attempted to cope with the influx of used vehicles still under warranty from their US counterpart.

There’s an old quote from Charlie Brown in a “Peanuts” cartoon in the 1950’s, “When it’s one man against a corporation, the corporation always wins”. And that appears to have played a part in the way the CBC and the other media outlets who followed framed their story.

In addition, the implication was made that without some change of heart by Nissan, a still viable 2013 Leaf would be headed for a landfill, soon to be followed by the thousands of others either sold in Canada or imported here from the USA.

But the glut of EVs in landfills is part of an ongoing anti-EV narrative that despite a complete lack of evidence just won’t die.

So, let us be clear. No electric car ever ends up in a landfill. In fact, used, damaged or depleted EV batteries have become a staple for those owning remote vacation properties, running a small business plagued by power failures or who just want to live off-grid. Local car dealerships trade in them almost daily.

In some places, they even stand by to power emergency facilities or keep the lights on for a community soccer field.

All batteries removed by an OEM dealership are immediately returned to one of its corporate units, where they are refurbished or dismantled for parts and still operating battery packs.

As for the rest of the car, studies show that 96% of every electric car is recycled. That’s more material than is returned to active service from all that stuff your Municipality picks up from your blue, grey and green boxes.

However, CBC (and to some extent the fine folks at Inside EVs) finally succeeded in encouraging Nissan Canada to get in touch with Clayton Brander.

Unfortunately, the best they could offer for a new battery, including labor and taxes was $13,500. And therefore, he has decided to wait until the border re-opens post-pandemic and find one of the American battery replacement operations promising him a better price.

So, what can we learn from all this…

First, it seems imperative that Nissan Canada be a little more savvy about Customer Service and especially at being open with those driving the original generation of the Nissan Leaf.

Yes, Nissan was first off the mark in manufacturing a viable mass-market electric car. And they should be applauded for that. But somewhere along the way, they seem to have forgotten that it was the early adopters of their technology who gave them that success and some respect for that trust should be accorded in return.

The same modicum of respect should be shown to their dealerships as well. Dealership after dealership told us they didn’t even know how to order a replacement battery, because Nissan no longer supplies them a code for it in their parts catalog.

Dealerships were likewise often left between a rock and a hard place, trying to serve their customers, without being provided full sales (and often service) training and information on their electric vehicles.

There is no reason that car dealers should have to take the heat for not knowing the answers to questions the OEM hasn’t provided them.

And a final brief note – Nissan, stop with the $40 and up (sometimes way up) charge for a simple battery test, one that any Leaf driver can now do themselves with a Leaf Spy (available from Amazon for around 25 bucks).

Since the story broke, we at the Victoria EV Association have been inundated by not only the owners of the first generation Leaf but those considering buying the 2020 version, all quite concerned about what prohibitive costs a Leaf owner’s future might hold.

While that’s an additional problem for Nissan to deal with, we believe those owning a Leaf should also know this…

And there are literally thousands of the Nissan Leaf with similar stories to tell. It’s a great car. Make that a terrific car. Even when it is purchased used.

But there’s another old quote worth keeping in mind – “Caveat Emptor”. Buyer beware.

Don’t purchase any used vehicle that’s been treated badly or comes to you from a much warmer climate, both of which degrade batteries faster and shorten their lives. Every used car dealer will happily provide you with the Carfax of any vehicle they sell, giving you all the information available on its past life and condition.

Warranties have expired on any Nissan Leaf registered (not manufactured, but registered) prior to 2016 and all models from 2016 onward carry an 8 year warranty on the battery.

That’s better than you’ll get on a new water heater or any other major appliance for that matter.

According to Clayton Brander, the only maintenance he had to do during his three years of Leaf ownership was replacing the windshield wipers. And this is a guy driving in the heart of the rain coast!

As with any car, the cost of ownership is a major consideration at the time of purchase. Electric cars don’t have much at all. Combine that with what you save on fuel costs and the amount of money left in your pocket is even greater.

Over eight years, what your electric car has saved you in ancillary costs will be higher than whatever a replacement battery may cost.

Meanwhile, there is a burgeoning industry in selling replacement and refurbished batteries among independent mechanics and service operations.

This weekend we were supplied a link to one operation in Quebec who even reduces your replacement cost by what they will recoup from selling your old battery.

As we move forward with the transition to electric transport, glitches like the ones covered above will no doubt arise. But the solutions to them will arrive as well.