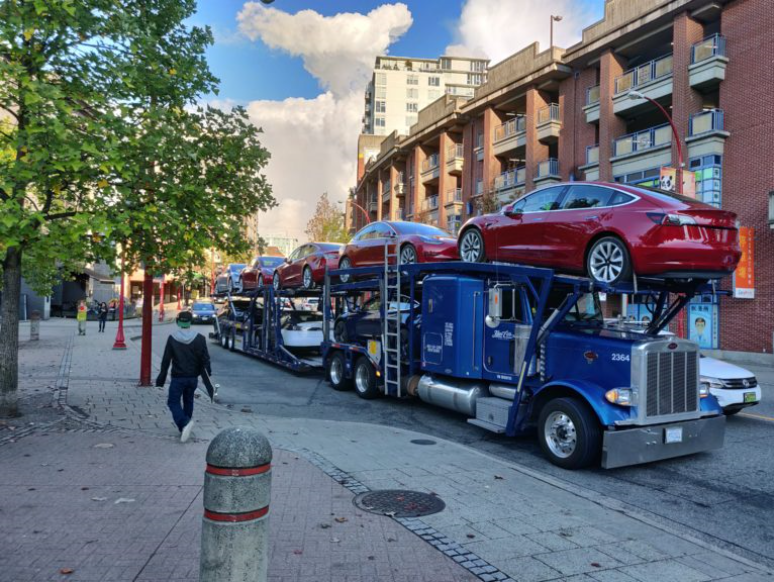 You could say that all three of this week’s featured posts are great news for supporters of electric vehicles and very bad news for car dealerships hoping to sustain interest in the internal combustion engine.

This week Tesla began delivering 900 recently purchased Model 3s to Vancouver, once again taking over parking at the PNE grounds where eager buyers are travelling from across that city, the Lower Mainland and the Gulf Islands (including ours) to pick them up.

The majority of this latest tranche of the Model 3 are the AWD models many Canadian Tesla customers opted to wait for instead of the first version of the Model 3 that rolled off the assembly lines.

The arrival of these vehicles further puts to the lie the claim that Tesla would give American buyers priority over Canadians as the Federal rebate program there winds down.

The photograph accompanying this post was taken by a British tourist who’d never seen a Tesla before and was further gobsmacked by watching one transport truck after another stacked with Model 3s rolling through Vancouver’s Chinatown.

Likely just as Gobsmacked were the sales staff of any ICE car dealerships along the delivery route, noting not only the loss of 900 customers they’ll probably never get back; but the number of gas guzzlers filling their own lots as Canadian purchases of new cars continue to decline.

Their concerns may be further heightened by the number of used EVs these new Model 3 drivers are putting into the aftermarket, where they are being snapped up almost as quickly as they arrive by those eager to join the rEVolution.

Let’s be honest. In this part of the world, we’re past the tipping point.