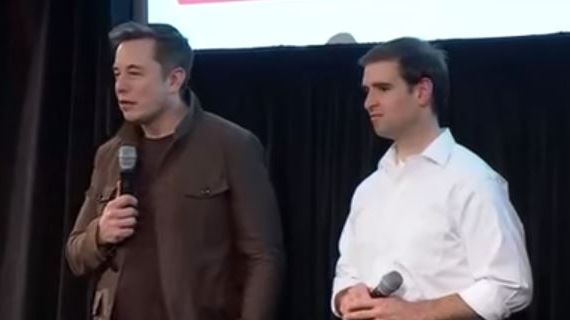 Shareholders Meeting video starts around 30 minute mark.  Lasts for 3 1/2 hours –  jammed with Tesla history and stories.  See below for play by play of some of the highlights.

Tesla CEO Elon Musk is talking to shareholders, starting with a history of the company. Soon, shareholders will talk to Musk. Here’s how it is going:

5:21 p.m. — At the beginning, Musk and his fellow Tesla creators didn’t know what they were doing. “Completely clueless” when it came to figuring out how to make a car, he says. Plus, many wouldn’t give a startup the time of day. “At times, we couldn’t get suppliers to call us back.” Musk adds. “That was the usual response.”

5:23 p.m. — Musk gives a shout out to a California company called AC Propulsion that pioneered electric cars more than a decade ago.

5:29 p.m. — “Electric airplanes. Still dying to do that,” Musk jokes as he recalls the conversation that originally got him to thinking about electric cars. Tesla Chief Technical Officer JB Straubel says he brought up the airplane idea initially with Musk. But both turned their thinking to cars. In 2003 and 2004, everyone was telling them there would be no interest in electric cars. Musk says he got a test ride in AC Propulsion’s car and he told them “you’ve got to show the world this is real.”

5:32 p.m. — After being told that AC wouldn’t make an electric car just for him, Musk says he asked if he could make one himself. That’s what led him to the consortium that would launch Tesla. It was never, “this is a great way to make money.” Rather, “When I told my friends about this, they said ‘You’re crazy.'” Creating a car company would be dumb enough, but launching an electric car company was considered “stupidity squared.” Musk put the company’s odds of success at 10%. He said he put in lots of his own money — he made one of his fortunes from PayPal — because he didn’t want to risk his friends’ money on the Tesla venture.

5:37 p.m. — He blasts General Motors for killing its electric car program, which had such devoted fans that they were holding candlelight vigils as their cars, the Saturn EV1, were being crushed.

5:40 p.m. — Big mistake: Thinking that he could take a Lotus Elise and add an electric powertrain to create the Tesla Roadster. In fact, everything changed. “In the end, only 6% or 7% of the Tesla roadster” had anything else in common with another car.

5:48 p.m. — Musk says he gave early test drives to Google founders Sergey Brin and Larry Page. The prototype developed a bug so it only went 10 miles per hour. Musk says he had to reassure them the car goes a lot faster — and they became investors. The lesson for people creating their own company: Adapt quickly, recognize and correct your mistakes. The sooner that happens, so much the better.

5:54 p.m. — Musk says he “was basically the chief designer of the body” of the original Tesla roadster. And he adds: “I don’t think I’m a good designer.” His inspirations: The Ferrari and Porsche.

5:56 p.m. — The team got 100 orders after giving test rides of two prototypes, which were barely hanging together, says Chief Technical Officer JB Straubel. Musk says “huge challenges” with the roadster including a transmission that “didn’t work.” The problem was eventually solved and Roadster deliveries began in 2008. Though it passed all required safety tests, Musk quips that the car was “completely unsafe” and “broke down all the time.” It required redesign and new suppliers. Straubel says Tesla had to move factories from overseas to California, including the battery pack manufacturer from Thailand. He says a lot of what’s special and under appreciated about Tesla is its manufacturing processes. “How important it is to build the machine that builds the machine,” is how Musk puts it.

6:15 p.m. — “I don’t know anyone who likes the current car buying experience,” Musk says. Tesla vowed to fix that, too, by not having conventional dealers. Most important thing: “Make sure that when people visit our store, they look forward to coming again.”

6:20 p.m. — Musk says designing a sexy sports car is relatively easy, but a sedan is hard. That led him to former General Motors and Mazda designer Franz von Holzhausen. “I realize it was the future,” von Holzhausen says.

6:25 p.m. — The design studio was a tent pitched in a corner of the SpaceX rocket factory. Musk told von Holzhausen he wanted the Model S to have seven seats — a very tough challenge in a sedan.

6:29 p.m. — In October, 2008, Musk says he met with head of R&D with Daimler in hopes of keeping Tesla alive. He says he was told they were thinking about an electric Smart car. He says he called and told Straubel that they had three months to have a working electric Smart car. At the time, Smart wasn’t sold in the U.S. So they sent an engineer to Mexico with $20,000, who came back with one. In a day, they had torn the whole car apart. It was the fastest Smart car ever. “You could do wheelies in the parking lot,” Musk says. The Daimler team arrived grumpy, but perked up when they drove the prototype — and they got a development contract. “If we hadn’t done that, Tesla would have died,” Musk says. It helped with credibility and Tesla needed the dough. Musk says he was tapped out and was borrowing money from friends at the time. It was early 2009, a time when the auto industry was hitting bottom and Chrysler and GM would be filing for bankruptcy reorganization.

6:35 p.m. — Tesla was losing money on every Roadster it built before the third quarter of 2009. But the Daimler investment was a turning point. “We were bailed out — by Daimler, not the government,” Musk says. Tesla had received and paid back an Energy Department loan. The loan was received in March, 2010.

6:47 p.m. — When it came to shopping the initial public offering, Musk says he found out Tesla could be polarizing. “Tesla is a company that seems to inspire love or hate,” he says. Investors were “rarely indifferent.” After the IPO, Musk says Tesla became one of the most shorted stocks on the Nasdaq — right up there with Skullcandy, Coinstar and Travelzoo. He hailed Toyota for joining with Tesla on the RAV4 electric and parting with its Fremont, Calif., factory that it operated jointly with GM. Today, it is Tesla’s factory.

6:55 p.m. — How Tesla created its Supercharger network, its high-speed chargers. Musk says it had been hoping another company would step up and install a network of high-speed electric-car chargers, but none did. Tesla was sending out teams of interns to scout locations at travel rest stops.

7:01 p.m. — The Gigafactory came about when Musk and his team realized there just wasn’t enough industry capacity to make the batteries that Tesla will need. Plus, most lithium-ion battery factories were aimed at supplying the electronics industry, not tailored to electric-car production. He says the Gigafactory will be capable of triple of the volume of what was expected. The party to celebrate its opening will come in July.

The Model X crossover has been “challenging,” Musk says. I need to fault myself for hubris in putting too much technology all at once into a product

He says he should have saved some of its most cool features for a version II or version III. The big problem at the moment: Making its signature feature, the gullwing doors over the second row, work correctly. “It’s a software problem. It’s figuring out how to interpret all the data from the sensors” and writing in the software in a way that knows how to open the doors under different circumstances. “Digging ourselves out of the hole” on that has been quite hard, he says. Two more software releases, which are usually sent wireless to the vehicles, are expected in the next month. “We will be at point where the doors are better than normal doors, as opposed to worse.” He added that anyone considering a Model X purchase should go ahead. “If you buy one now or soon, you will love the doors because the software will be right.”

7:23 p.m. — Musk says Nevada has put in $20 million so far for the battery Gigafactory, compared to $2 billion in investment so far by Tesla and its partners. “They are giving away nothing. It was basically bushes and desert,” he says. “It’s basically a 1% discount.”

7:39 p.m. — Musk closes the more than two hour history of Tesla by talking about how the real improvements in the future will come at the manufacturing level. “The true problem and difficulty is building the machine that makes the machine,” he says.

7:46 p.m. — A Nevada union representative criticizes Tesla for labor practices in building the Gigafactory. Musk says if Tesla had wanted to save money, it never would have built cars in California. And he noted other automakers not only build cars in states with cheaper labor costs, but other countries.

7:51 p.m. — Musk says Superchargers won’t be free for Model 3, its mass-market electric car next year, unless people buy an optional package that includes it.

People should charge their cars where they charge their phones — not at a gas station. They need to value their time. — Elon Musk

7:54 p.m. — Musk won’t rule out the possibility that someday Tesla made find a way to make electric aircraft, but not now. For one, he says he wants the company to stay focused. For the other, the energy density of batteries isn’t where it needs to be yet.

8:08 p.m. — Musk says no worries about the supply of lithum, used in Tesla batteries. “The nice thing about lithium is it’s extremely abundant on earth,” he says. In the next few years, Straubel says that Tesla is trying to find ways to reduce costs of lithium, but there have been no problems with supply.

8:40 p.m. — Musk says he’s already overdue to a board of directors meeting in closing the session. The Model X’s falcon wing doors have been a challenge to get right. (Credit: Tesla Motors)

Elon Musk on Tuesday owned the widely-reported problems with the Model X. And later explained why the Model X and Model S will lead the Model 3 in technology.

Hubris: “This [Model X] program has been challenging. I particularly need to fault myself for a fair bit of hubris for putting too much technology all at once into a product,” he said.

Should have waited: Musk said some of the coolest tech was rushed: “In retrospect the right thing to do with the Model X would have been to take a lot of the really awesome cool things and table them for a future version,” Musk said. “So, if I could wind back the clock, I would say, ‘look we’ve got these great ideas. Things that I want to implement and other people want to implement.’ But the smart move would actually have been to table those for version 2 and version 3 of Model X instead of piling them all into version 1.”