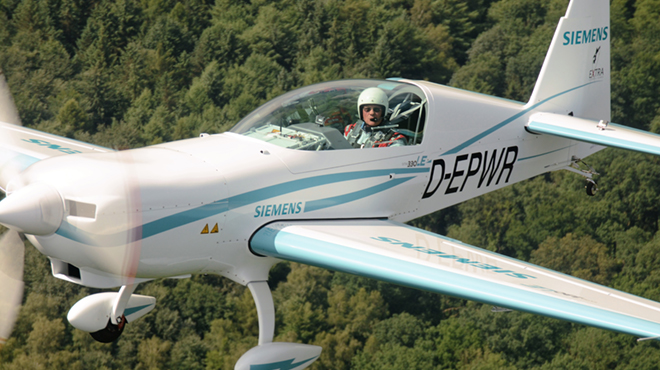 Siemens researchers have developed a new type of electric motor that delivers a continuous output of about 260 kW and weighs 50 kg. The new drive system, designed for a joint project of Siemens and Airbus to develop electrified aircraft, recently made its maiden flight in an Extra 330LE aerobatic airplane.“This day will change aviation,” said Frank Anton, Siemens’ head of eAircraft. “This is the first time that an electric aircraft in the quarter-megawatt performance class has flown.” The Extra 330LE, which weighs about 1,000 kg, is particularly well suited to serve as a flying test bed for the new propulsion system.Siemens and Airbus plan to use the new motor as a basis for developing regional airliners powered by hybrid propulsion systems. “By 2030, we expect to see initial aircraft with up to 100 passengers and a range of around 1,000 kilometers,” said Anton. Airbus Group and Siemens have launched a joint project to explore the electrification of aviation. The goal is to demonstrate the technical feasibility of various hybrid/electric aircraft propulsion systems by 2020.The two giant companies plan to develop prototypes for propulsion systems with power classes ranging from a few hundred kilowatts up to 10 or more megawatts, for small-to-medium-size airplanes, helicopters and unmanned drones.

The companies have assigned a team of around 200 employees to the project.

The two companies, together with Austria’s Diamond Aircraft, presented a hybrid aircraft in 2011. Since then, Siemens has been developing an electric aircraft motor that supplies five times as much power while retaining the same weight.

Siemens experts were able to cut the weight of the motor’s end shield by more than half, and an innovative arrangement of magnets allowed less material to be used there as well. A new cooling concept that uses direct-cooled conductors also helped reduce weight.

“Electric and electric-hybrid flight represent some of the biggest industrial challenges of our time, aiming at zero-emissions aviation. The progress we have achieved in this arena in only a few years is breath-taking, culminating in last year’s channel crossing of our all-electric E-Fan aircraft,” said Tom Enders, CEO of Airbus Group. “We believe that by 2030 passenger aircraft below 100 seats could be propelled by hybrid propulsion systems.”

“By entering the field of highly innovative aircraft propulsion technology, we’re opening a new chapter in e-mobility. Collaboration with Airbus Group will create new perspectives for our company and open us up even more to disruptive innovation,” said Siemens CEO Joe Kaeser. Siemens researchers have developed a new type of electric motor that, with a weight of just 50 kilograms, delivers a continuous output of about 260 kilowatts – five times more than comparable drive systems. High-power: The new electric motor has a power/weight ratio of a five kilowatts per kilogram.