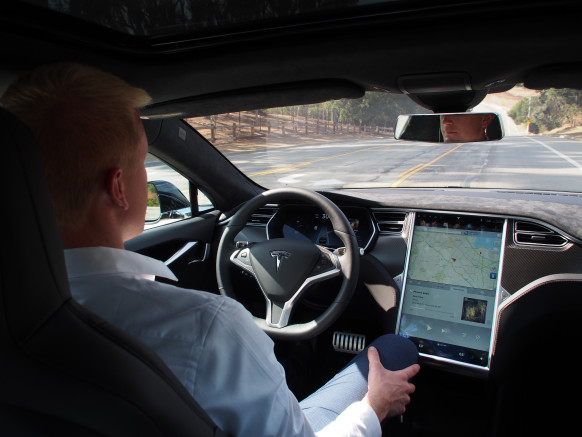 Self Driving EV is Here

Self Driving EV is Here

Having owned our Tesla Models S for roughly 4 months prior to the Version 7 release of the Tesla update I must say it felt like Christmas in October!  The anticipation was enormous and the excitement palpable. When I woke up in the morning and saw the update ready to install I couldn’t wait, even though I did the math quickly and the expected install time was just a little longer than the time required before I had to take my kids to school I risked it and said update now.

The next 2 hours were filled with excitement and anticipation of what the future might hold. I was giddy. The kids were so excited as well.

By the 1 hour 40 minute mark the update was complete and my kids and I loaded into our freshly upgraded Tesla and headed off to school. Having seen some reviews online I did know what to expect to see, however when I finally saw the new screens with my own eyes I was pleasantly surprised. The new look was sleek and minimal, the new driver display had some new tricks including the much desired tire pressure monitor.

The 17 inch display also adopted the new look with a cleaner look and some larger touch areas to select options.

As we pulled out of the garage and the ultrasonic sensors detected our surroundings we were informed with morphing distance measurements surrounding our car giving a more complete picture of what we could hit, we quickly exited the garage quietly and made our way to the closest well marked road in town. Once we turned onto the road the display lit up showing it could read the road markings and the auto steer indicator lit up. I double tapped the cruise control lever and what happened next was nothing short of amazing.

My 4 month old car, something I never would have imagined in my life, received an update that not only improved the car but advanced self-driving technology by leaps and bounds. The car begin driving us along the road and keeping distance while indicating what it could see ahead. I must have had a grin on my face all day. The kids giggled with glee as did I as the car drove us all the way to school.

Having described my emotions and feelings I will also admit the self-driving features are not without draw backs. It is in Beta and as such needs constant attention. You cannot look away and have to watch it like a hawk but it is all worth it when you see it “learning” the roads. Each and every time you drive the road the autopilot improves in its ability to keep in the lane and anticipate the road.

For all the Tesla owners out there with the new auto pilot features please remember, use it responsibility and do not do silly things and record it and post it on social media and expect there not to be repercussions. Too many people are doing silly things and it will eventually prompt a response from authorities or Tesla themselves.

Let’s keep the rEVolution moving forward! I for one cannot wait to see what’s coming next!

4 kids from Calgary to Disneyland in a Tesla model S.

TONIGHT, TESLA MAKES its cars autonomous. Well, semi-autonomous. And it did it with an over-the-air update, effectively making tens of thousands of cars already sold to customers way better.

There are two things to talk about here. There’s the small story about the features and what the upgrade actually looks like and how it works. That’s a good place to start: This is the biggest change to the visual display of the Model S and X ever. There are new instrument panels, app windows are larger and take up more of the 17-inch touchscreen. Drivers will now get more information about what their cars are doing when in Autopilot, they can lock and unlock their car from the status bar. There’s a new clock!

These are simple cosmetic changes. The Big Story is that all of this—and really, who cares about anything beyond autopilot mode?—is being pushed through to customers’ Teslas overnight. The update will begin being pushed out tonight, and will hit every Tesla made and sold in the US in the past year over the course of this week.

Before you get too excited about an autonomous, hands-free present, you need to know that you can’t nap in the back, chauffeured around in beautiful, electric silence.

Even in Autopilot, you keep your hands on the steering