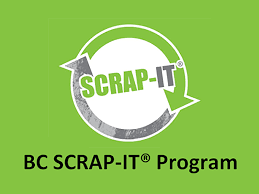 Last Saturday, recently retired Scrap-It BC Founder and CEO Denis Rogoza met with members of the VEVC to provide both a history of the program and an insight into its future.

Originally launched in 1996 with a province wide mandate to reduce carbon and Smog by removing polluting vehicles from the road, Scrap-It evolved in 2008 to concentrate on carbon reduction and has now become one of the key incentives to encourage drivers to switch to electric vehicles.

Since 2013, Scrap-It has been completely privately funded and as of this year has distributed more than $35 Million in incentives toward the purchase of zero emission vehicles and Level 2 chargers.

Scrap-It boasts an astonishing 48,000 ICE vehicles removed from BC roads (all of them completely recycled) and the elimination of more than a million tons of GHG.

Anyone wondering about the desire of BC residents to embrace the program need only look at the anticipated activity for the coming year. As of today, 2020 Scrap-it vehicle rebates are over subscribed by 3 times the grants available. Meanwhile, recently launched sister program Zap-It which provides incentives for chargers has a waiting list of 2000 — or double what the program can supply in the next 12 months.