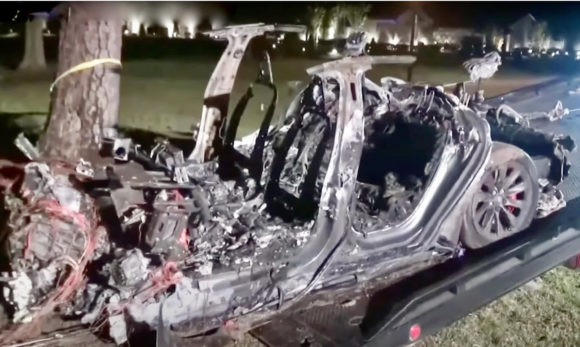 Just like horror icons Jason Voorhees, Freddie Kruger and Michael Myers, the terrifying tale of the self-emolating Tesla has once again captured the nation’s attention.

Saturday night, in Texas, a 2019 Tesla Model S crashed into a tree and burst into flames, its two occupants unfortunately deceased by the time first responders arrived.

Within hours, media world-wide was reporting that Tesla’s auto-pilot feature was at fault since no one had been driving at the time of the accident, because one of the deceased had been found in the front passenger seat and one in a back seat.  This, despite the official police report stating that their initial investigation was “inconclusive”.

How did the media reach this conclusion? Apparently, the wives of the dead men recalled them previously discussing the auto-pilot feature.

To be sure, it’s a tragic story. And one that requires further examination. Because…

Sometimes cars get into accidents. Teslas less often than others. But more on that in a moment.

Sometimes cars catch fire. Teslas less often than others. And more on that in a moment too.

And it’s important to understand that sometimes the occupants of vehicles involved in a motor vehicle accident are tossed around. Sometimes, they survive the initial impact but are then unable to find their way out of the wreckage.

And that can happen in a Tesla as well.

But what any Tesla driver will tell you is that the vehicle’s Auto-pilot cannot be engaged unless a driver is at the wheel of the car. Not only that, but you can’t engage it and then leave your seat. Because it doesn’t work that way either.

What they’ll also tell you, is that because of Tesla’s intricate software and security systems, “Tesla not only knows where you’re going and how fast you’re going — it knows how much you weigh”.  In other words, the vehicle is constantly updating its vital signs, much like an aircraft’s black box.

This morning, Tesla CEO, Elon Musk, issued a statement revealing that the vehicle’s Tesla log shows that auto-pilot was not engaged at the time of the accident.

The company also released its Vehicle Fire Data for the period from 2012-2020 which reveals that there has been about one Tesla vehicle fire for every 205 million miles Teslas have traveled.

That’s 10-times higher than the average distance between fires of 19 million miles for other vehicles in the U.S., according to the National Fire Protection Association (NFPA) and U.S. Department of Transportation. 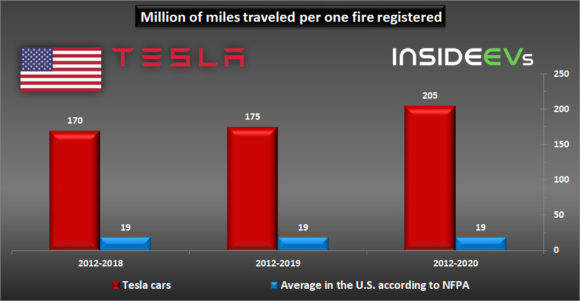 The company also released its overall vehicle safety report which states that its Model S, Model X and Model 3 have achieved the lowest overall probability of injury of any vehicle ever tested by the U.S. government’s New Car Assessment Program.

The most recent annual figures released by the National Fire Protection Association concurs, reporting 212,500 total vehicle fires in the U.S., which caused 560 deaths, 1,500 injuries and $1.9 billion in direct property damage.

So why is a Tesla catching fire international front page news?

Well, it might be because the enormous popularity of the Tesla and the notoriety of its inventor means more people will have an interest in such a story.

Or it might just be that unlike Internal Combustion Engine manufacturers, Oil companies and others connected to the automotive industry — Tesla doesn’t advertise, refusing to participate even in event television like the Super Bowl or those thick weekend automotive sections that keep many newspapers afloat.

Whatever the reason, like those horror icons, the burning Tesla just keeps coming back to scare away car buyers.