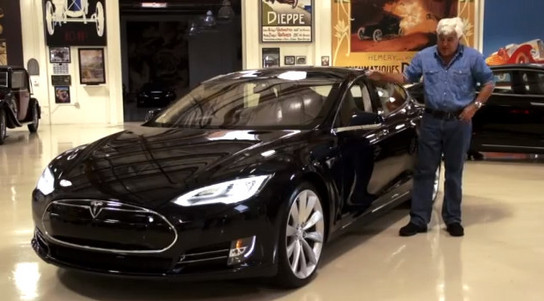 Very few of us can buy a car by way of an apology. Even fewer still can buy a Tesla Model S to make up for our goof. Then again, as our connections and our pocketbooks go, none of us are Jay Leno.

Here, we have Leno telling the story of his first Tesla, which from the video looks to be a handsome blue Model S. Apparently, when Jay Leno’s Garage was in its infancy, its eponymous host featured Elon Musk and the then-new Tesla Roadster. During the off-camera exchange, the host and executive traded phone numbers.

Some time later, as Leno was preparing to film the JLG show on CNBC, he reached out to Musk one afternoon, hoping to get the okay to film at Tesla’s Fremont (CA) factory. Not realizing the exec was abroad, though, Leno woke him in the middle of the night. Feeling guilty, Leno told Musk he wanted to buy a Tesla.

The amazing thing is the absence of noise – there’s no engine noise, there’s no wind noise, if you have a vehicle like this that doesn’t have any engine noise or sport muffler, you gotta make everything in the cabin even more quiet because that will just accentuate any squeak that might be in the dashboard… and look how fast it is! – JL

The most amazing thing about electric cars is you have almost zero maintenance. Even my 1909 Baker Electric … I’ve had it almost 20 years and it requires no maintenance at all.

The range in this car is not an issue… the problem with electric cars has been solved!