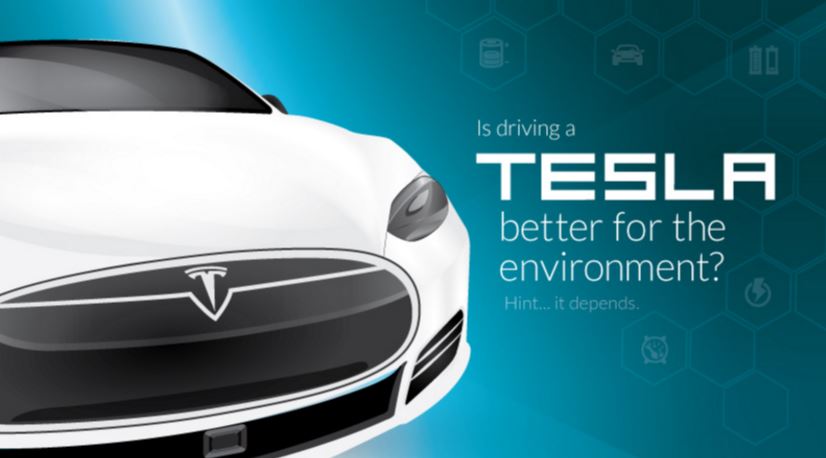 Fact: the Tesla Model S is an environmentally friendly, zero emissions electric vehicle that won’t pollute the air like gas-powered cars. Carbon emissions from a gas car’s tailpipe has a dangerous impact on global warming.

Okay, many get this… but just how harmful is that pollution coming out of a gas car’s tailpipe? Well, one example: if you leave your garage door shut with your gas-powered car on, it can kill you. In addition, Tesla CEO Elon Musk explains that, “combustion cars emit toxic gases. According to an MIT study, there are 53,000 deaths per year in the U.S. alone from auto emissions.”

Regardless, a common argument from electric vehicle “deniers” is that we’re not looking at the complete picture — what about a cradle to the grave lifetime vehicle analysis?

As reported by Visual Capitalist*, “According to a study done by the Union of Concerned Scientists, the average new gasoline vehicle generates the equivalent of 29 MPG of emissions over its lifetime.

The study found that the average electric vehicle has emission equivalents in a range between 35 MPG to 135 MPG depending on the local power grid of the state it is driven in.”

But, those stats look at the average electric vehicle. And I certainly wouldn’t call a Tesla Model S average. So, what does the Union of Concerned Scientists* say about Tesla? CleanTechnica reports, “Okay, let’s look at a Tesla. In fact, let’s go hog wild and look at a Tesla Model S P90D with Ludicrous mode. And let’s do it in Los Angeles, car culture central with all of its freeways. That’s right, a tricked-out Tesla has a third the CO2e emissions [see chart below] of an average gas car in LA.

‘Wait a minute,’ you say to yourself, ‘that’s just the fuel comparison. What about building the things in the first place, huh, huh, huh?!’ After all, there’s got to be something wrong.

Well, no, the [chart below] is a full lifecycle CO2e emissions count from manufacturing through scrapping.”

In addition, Visual Capitalist* reports that, “In the very near future, plugging in [an electric vehicle] will be better in 100% of places in America.

Here’s why… Battery technology will continue to get better. More efficiency means lighter and better cars. Coal is falling. It’s gone from 44% of all U.S. power generation in 2009 to 33% in 2015. It’s forecasted to fall to 22% by 2020. [And] many states also have committed to specific targets for green energy as a portion of their energy mix. More renewables for the grid means less emissions.”

And remember: lots of Tesla owners have rooftop solar panels that power their Model S. So, they’re not dependent on the grid, instead… they’re driving on sunshine.

what does this all mean? “For investors, these changes will create many opportunities for investors. As the electric car era is ushered in, some experts are predicting that entire power grids will need to be re-wired to accommodate. Automobile dealer networks will be profoundly affected. Car part manufacturers will also have to adapt. How many pieces are in a typical gas-powered vehicle? According to energy expert Gianni Kovacevic there are about 100 [see image below]. In an electric vehicle, which only needs about 20 components, many of these parts such as pistons and spark plugs will become antiquated.” And, don’t forget an added bonus  — less parts means less maintenance. And less maintenance means more money in your pocket. In any event, check out this informative infographic that shows how [EVs] can help you make your own contribution to reducing your carbon footprint.

It shows the full cradle to the grave lifecycle in which electric vehicles start out with more emissions, but, within 19,000 miles (maybe a little over a year) of driving that disparity is offset. Then, the clean energy, zero emissions advantages of driving electric can quickly be realized.

Full Report that this article is based on here.