50 new charging stations will be installed across 7 boroughs

The City of Montreal said it plans to have 1,000 charging stations installed across all boroughs by 2020. (Jonathan Hayward/Canadian Press)

The City of Montreal is giving its electric vehicle charging network a big boost.

Fifty new charging stations will be installed across seven boroughs. The new stations will provide 100 spots for drivers to charge their electric vehicle.

The new stations will be installed in the following boroughs:

The city said it plans to have 1,000 stations installed across all boroughs by 2020.

It’s not the first time this year that Montreal announced it would be adding more charging stations.

In August, Montreal Mayor Denis Coderre said the city would be installing 25 stations in the downtown core.

These new stations come in addition to 80 others which were installed under a Hydro-Québec program in the parking lots of arenas, libraries, community centres and other municipal parking lots.

According to the city, Montreal is the first metropolis in Canada to have a network of charging station this size available to residents and car-sharing services.

As of August 2016, there were 1,468 electric vehicles registered in Montreal according to documents from the Quebec association of Electric Vehicles.

Marc Belcourt of BMW demonstrates the charging of an electric car at the Montreal International Auto Show at Palais des congrès. (CBC)

(Note: CBC does not endorse and is not responsible for the content of external links.)

Electric cars are taking centre stage at the Montreal International Auto Show, thanks in part to the Quebec government’s efforts to get them in the hands of consumers.

The Quebec Ministry of Energy and Natural Resources, along with CAA-Quebec, is organizing test drives of 13 different models on a 3.1-kilometre circuit at the Palais des congrès.

The province contributed $85,000 for these test drives, on top of other programs like tax incentives, to make electric cars more attractive.

And on Thursday, Hydro-Québec announced a per-hour rate to the charging stations it has installed across the province: 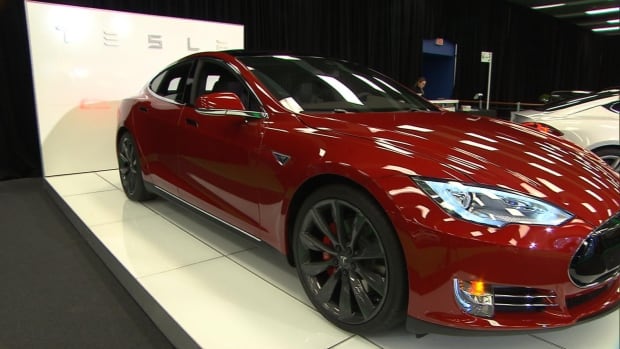 “Now we’re up to 8,400 EVs in Quebec and this is about half the EVs throughout Canada,” said France Lampron, director of transportation electrification at Hydro-Québec.

However, with falling gas prices, the financial incentive to go electric isn’t what it once was.

“I think we see the greater effect when gas prices are very high,” said Marc Belcourt, a representative for BMW at the Auto Show.

“Then people start realizing every single week how much they’re spending on fuel and then start to look for ways on how they can reduce their fuel expenditure.”

The auto show will run until Jan. 24.