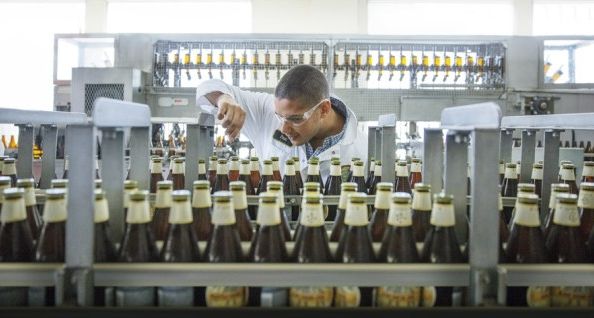 The electric grid is changing faster than ever. With the rise of renewables and other technologies, energy is getting cleaner, more affordable, and more reliable. That said, understanding the inner workings of the power grid – voltage, distribution networks, substations, inverters, you name it – can get pretty complicated, pretty fast.

Fortunately, you can leave the complexity to us: our team of expert solar consultants, grid engineers, and energy economists has you covered. And to shed light on how the power grid works – and how to improve it – it can help to draw parallels with a far more familiar topic: beer.

It’s time to knock back 7 insights from the beer world that will leave you feeling not only refreshed, but also more knowledgeable about the power grid that you use everyday.

Beer-to-grid insight #1: Too much CO2 is bad

Sometimes, if a brewer isn’t careful, beer can get over-carbonated. Not only does this negatively affect the flavor and feel of the beer, it can actually be dangerous. Many homebrewers carbonate their beer directly in bottles, by adding a small amount of sugar to the bottle. If the beer is bottled before the fermentation stage is complete, or if too much sugar gets added to the bottle, the beer yeast can make too much carbon dioxide and the bottle can explode. While this is rare, the lesson is clear: too much CO2 can be dangerous, and it needs to be carefully monitored.

Same thing applies to the energy world. Our atmosphere is fast becoming “over-carbonated,” with rising CO2 levels and global warming posing serious risks. To combat climate change, we need to drastically reduce CO2 pollution from the electric grid and elsewhere. More clean power, more energy efficiency, and other innovations are already helping to “de-carbonate” the electric sector, but the grid of the future must go even further.

Microbreweries are well known for producing higher-quality beer. Fortunately for beer lovers, the past decade has brought dramatic growth in the microbrewery space. Guess what else has grown at a remarkably similar rate? You guessed it: solar rooftops.

Beyond rapid growth, microbreweries and residential solar have something else important in common: they keep production (and jobs) local. By producing beer locally, people waste less energy and resources in transporting and distributing the beer across a state or country. The story is similar with how rooftop solar reduces waste on the power grid. Keeping power generation local means less of it wasted. In fact, about 6% of all the electricity that is moved through the U.S. grid is currently lost in transit — and in 2014, that waste totaled about 199 million MWh, or more than the net electricity generation of the entire state of California.

Not to mention that keeping electricity local reduces the need for building and maintaining expensive and clunky power transmission equipment. By producing power on your roof, its path to your home is more direct, less wasteful, and can collectively save you and your neighbors billions of dollars.

Beer-to-grid insight #3: We can learn a lot from Germany

Brauerei Weihenstephan, located in Germany, is the oldest continuously operating brewery in the world. With over 950 years of brewing experience, one could say that Germany’s beer market is well developed. With an annual production of over 9.4 million kiloliters of beer in 2013, Germany produced 65% more beer per capita than the United States.

As with beer, Germany also has deep expertise in solar power. In 1990, Germany introduced policies that were highly effective in accelerating the growth of solar installations. Today, solar PV accounts for about 7.5% of Germany’s net electricity consumption, one of the highest shares of any country. Renewables provide more than one third of Germany’s net consumption, and the country still maintains one of the most reliable grids in the world.

Beer-to-grid insight #4: Beer foam can teach you about electric power

Even for the nitty-gritty technical details of how the electric grid works, beer can be instructive. For example, a filled beer mug (see below) is often used as an analogy to describe different aspects of electricity, including concepts like “real power” and “reactive power”.

Some engineers liken “real power” – defined as power that does work like running TVs and light bulbs – to beer itself. And they compare “reactive power” – which can be used to run motors and is a key lever for maintaining voltage – to beer foam. The mug as a whole then represents the “apparent power,” which reflects the combination of real power and reactive power. Just as you want the right balance of beer and foam in your glass, it’s also important that real power and reactive power are carefully balanced in your power grid — to make sure electricity flows efficiently.

Just as you want the right balance of beer and foam in your glass, it’s also important that real power and reactive power are carefully balanced in your power grid (Source: Quora)

Advanced technologies like smart inverters, distributed generation, and battery storage can help keep the grid – and things like real power and reactive power – in balance and running smoothly. For example, SolarCity’s Smart Energy Homes integrate solar panels, batteries, smart inverters, and other controllable loads to optimize your generation and use of real power from solar, while injecting and absorbing reactive power from the grid at the right time to maintain voltage. Doing so can save you money while improving the grid’s operational efficiency and lowering the cost of grid management. Basically, you enjoy your beer, and everyone benefits!

One of the great joys of beer is the sheer variety of available options – ales, lagers, stouts, malts, organic, local, imported, and the list goes on.

As with beer, consumers want choice when it comes to their energy. When there’s no choice, consumers are stuck with the electricity the utility delivers to them, no matter what it costs, or whether it’s from coal, natural gas, or other fossil fuels. Recent surveys have shown that more than two-thirds of American households would like more choice in their electricity supply. A solid majority of households are also specifically opposed to efforts that restrict consumer choice by charging extra fees on solar customers.

Producing solar energy from one’s roof is one of the most effective choices a household can make in order to cut energy costs, be more energy-independent, and help the environment.

The first person who brings beer to a party is usually pretty popular. Solar customers have also proven themselves to be the life of the party – as they can really get things going. Once they go solar, they often inspire their neighbors and friends to explore going solar themselves. As a result, solar power can be remarkably contagious: more than 1 in 3 SolarCity customers are referred by a friend.

The green dots in the map below, for example, show how word-of-mouth referrals can catalyze solar installations across an entire region.

Beer-to-grid insight #7: You can make it at home

MAKING BEER IS HARD.
MAKING SOLAR POWER IS EASY.
FIND OUT HOW.